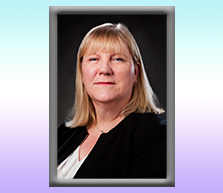 By Rebecca Martin, PhD
Director of the Center for Global Health, US Centers for Disease Control and Prevention

The findings and conclusions in this report are those of the author and do not necessarily represent the views of the Centers for Disease Control and Prevention (CDC)/ Agency for Toxic Substances and Disease Registry (ATSDR).

Data are the Foundation of Public Health Action

Over the more than 70-year history of the US Centers for Disease Control and Prevention (CDC), the agency has used data as the foundation of evidence-based decision-making. This data-driven approach is evident throughout CDC’s science as well as its program development and implementation – only what is accurately measured can be effectively managed and improved.

A recent report by the World Health Organization (WHO) highlighted the importance of monitoring to obtain accurate and timely data for measuring program performance and impact.1 Good data are essential for effective decision-making, but are ultimately only a means to an end. Data must be compiled and findings analyzed and disseminated so that stakeholders in government, multilateral organizations, nongovernmental organizations, academia, and civil society can apply them for efficient and effective policy and program development and implementation.

Data for Action: The Value of Measuring Impact

Objective measurement of program impact is the best way to definitively show how well a specific intervention works, and to identify ways in which it can be improved. Programs must be efficient as well as effective, as governments often look beyond health effects to cost-benefit analyses and economic impacts as justification for action. Additionally, public health interventions must be designed to be scalable; measuring the impact of a smaller pilot program can assess how well it can be scaled up to cover large populations.

Effective measurement of impact requires data from a variety of sources – traditional public health surveillance, observational studies, surveys, health information and other administrative systems, and more. To ensure maximal utility, desired uses for information should be considered when designing systems so that the proper data are collected and analyzed. Data collection and analysis must also be thought of as a continual process, ideally with feedback loops to enable refining of program efforts to improve results, as one-off efforts are generally ineffective for long-term assessment of impact.

Some examples of CDC’s work, in collaboration with other partners, illustrate the value of using data to measure the effectiveness of public health action.

Population-based HIV impact assessments. Under the President’s Emergency Plan for AIDS Relief (PEPFAR), CDC worked with Columbia University to measure the impact of 14 years of programs in Malawi, Zimbabwe, and Zambia to drive down and control the HIV epidemics in those countries. Results show that progress has been made:  people who are HIV-infected, have been tested, and are on treatment with antiretroviral medications, often have their viral load reduced to undetectable levels – meaning that they cannot transmit HIV infection to others. 2 Impact assessments will be critical to knowing whether HIV/AIDS programs are reaching the 2020 UN 90-90-90 targets (90% of all people living with HIV will know their HIV status, 90% of all people with diagnosed HIV infection will receive sustained antiretroviral therapy, and 90% of all people receiving antiretroviral therapy will have viral suppression). Data from these impact assessments also show that HIV prevention and treatment efforts need to be more focused on youth, especially young women, to better address groups experiencing increased HIV burden. 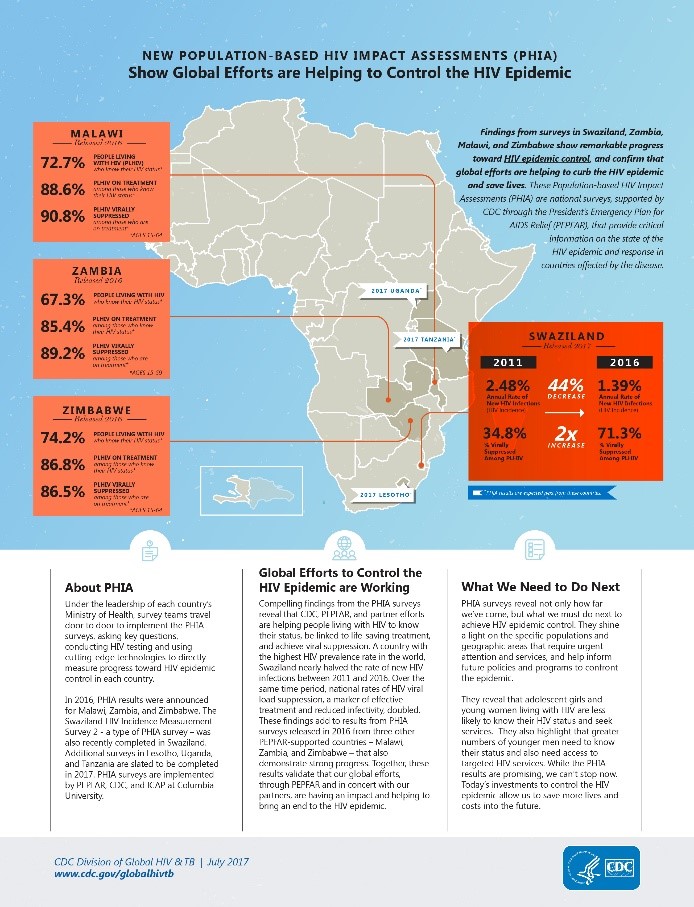 Surveillance in polio eradication. As a spearheading partner of the Global Polio Eradication Initiative, CDC has been working with the World Health Organization, UNICEF, Rotary International, the Bill and Melinda Gates Foundation, countries and other partners for nearly three decades in a monumental effort to eradicate polio. Polio cases caused by wild poliovirus transmission have dropped from 350,000 in more than 100 countries worldwide in 1988 to only 8 in two countries so far this year (http://polioeradication.org/polio-today/polio-now/this-week). Quality surveillance for acute flaccid paralysis, which is a marker for poliovirus transmission, and enhanced environmental surveillance, is required to detect every suspect case until eradication is achieved and then after certification of eradication, to ensure the world remains polio free. Investigations will also help identify areas from which data are not being reported, as occurred in recent years in Nigeria due to political and social instability. CDC is working with partners to improve surveillance in conflict settings and complex emergencies, has developed improved methods for environmental surveillance, and has strengthened surveillance for acute flaccid paralysis.3 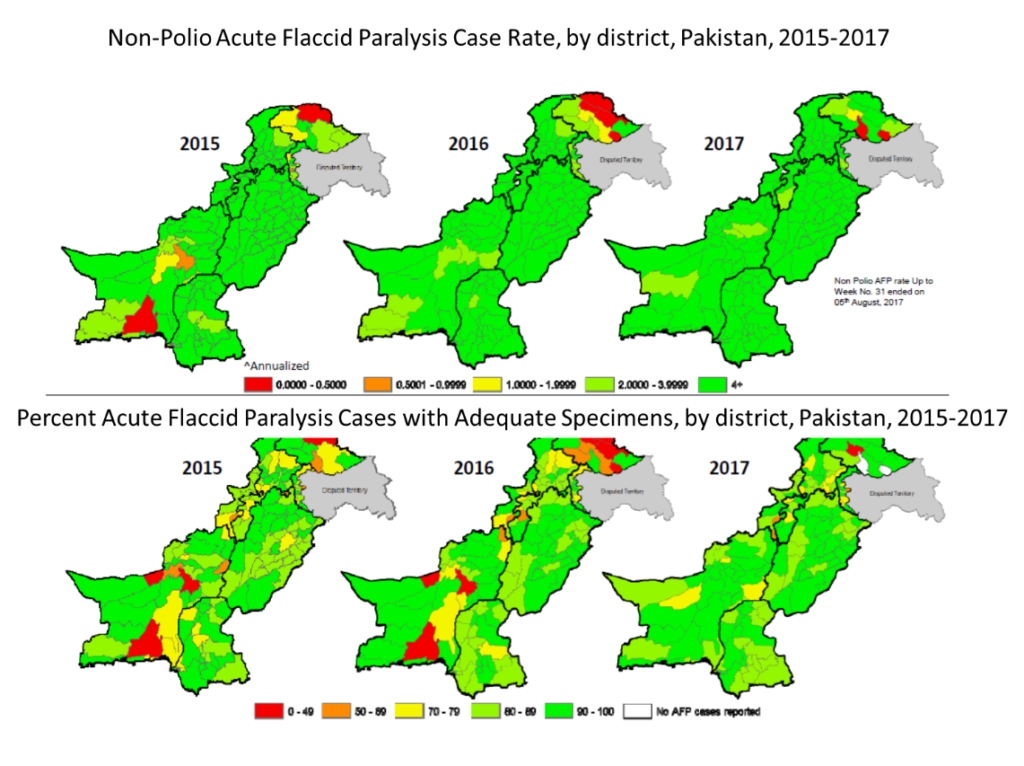 Measuring capacity built. One of the keys to successful infectious disease outbreak prevention and response is building and strengthening public health infrastructure. Helping countries build the needed capacity to stop outbreaks at their source will prevent epidemics by improving detection and response time. As a lead partner in the US government-led Global Health Security work, CDC is working with countries to make them better prepared to prevent, detect, and respond to infectious disease threats and promote global health security as an international security priority.  During the 2014–2016 West Africa Ebola epidemic, Liberia was one of the three most heavily impacted countries, where a delayed and unsynchronized response that took months to fully implement led to more than 28,000 cases and 11,000 deaths in the main epidemic wave. By 2016, Liberia’s strengthened capacity facilitated almost immediate detection and response to a new outbreak, which was limited to 13 cases and 9 deaths before being stopped.5 In Uganda, global health security investments enabled the country to build capacity to better control ongoing outbreaks of Yellow Fever, improving response time by weeks and substantially reducing cases and deaths.6 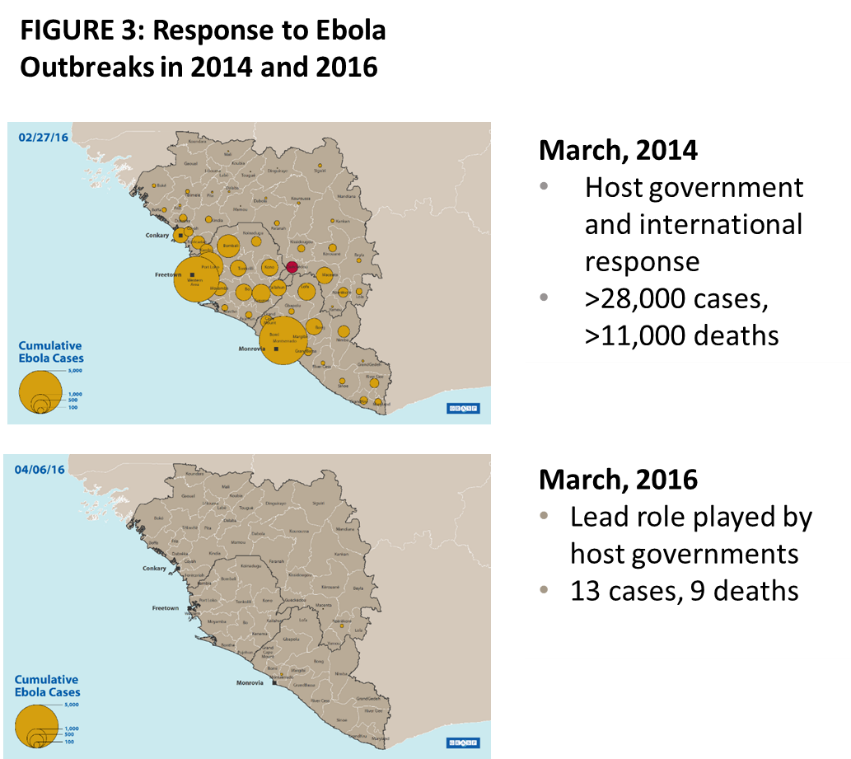 Since CDC’s inception, one of its most important functions has been the collection, compilation, analysis, interpretation, and dissemination of data to guide actions and policies to improve health. As CDC’s global health portfolio has grown throughout the years, the agency (in partnership with WHO, NGOs, and individual countries) has increased its involvement in monitoring and surveillance worldwide to detect risks early, measure their impact, and stop them swiftly. This focus on data has provided much more detailed and actionable information on population health status as well as on the impact of public health interventions. By continuing to expand and refine its ability to measure program impact, CDC is helping to ensure a safer and healthier America and world for all.

Rebecca Martin is the Director of the Center for Global Health at the US Centers for Disease Control and Prevention. Dr. Martin has more than 20 years of experience in international health, and has worked both domestically and internationally in immunization, HIV, and health system strengthening. She has had CDC assignments in Kenya, Tanzania, and Denmark, and now leads CDC’s global efforts to protect and improve health globally through science, policy, partnership, and evidence-based public health action.